I put Hub and myself in a very unsafe situation last night and I’m still kicking myself for it.

We headed downtown for what was supposed to be a quick trip to my office for Hub to look at some of my materials on Differentiated Instruction and then dinner on the Riverwalk.

Hub was hungry, having just gotten off work, so we opted to head to dinner first.

We had dinner on the River at a restaurant that’s across from the Nix “optical illusion.”  It’s fun to eat there and people-watch as the boat tours float by.  The mild temps and the setting sun added to the relaxed atmosphere.

We decided to take a stroll after dinner and meandered along the River past the restaurants and over to the big canal where the stairs lead up close to San Fernando Cathedral.

We were both a bit disoriented until we realized that if we turned right, we’d be on our way toward the museum.  There’s always a bit of comfort in the realization when you’re not really lost.

We both noticed the cathedral at the same time and whipped out our iPhones to take some photos. This wasn’t a photo excursion, so I didn’t bring either of my other cameras.  Too bad, too, because every. single. photo. I took with my phone was blurry due to the setting sun and decreased light.  I know I could have resolved that if I had been shooting with my DSLR. 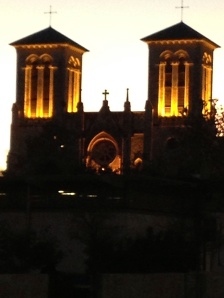 And this is where I put us in danger:

In my never-ending pursuit of the “perfect” shot, I began to wander closer to a group of, shall we say “less desirable” people.  Hub continued to tell me to hurry up, that we should head back down to the River, and to protect my phone.

I let him know I was being both careful and almost done.   As all of this was going on, we watched as one of the group headed quickly over to us and stood almost in front of me, ready to swipe my phone from my hand if I held it up to take another picture.

I didn’t look directly at him, but saw all of this in my periphery.  As the kid was moving toward me, I began to bring my phone close in to my body while Hub & I talked about my not being sure if my shots were blurry and I’d have to wait to find out after I uploaded to the computer at home. The kid took off at some point, I remember he wasn’t there for long.  Hub & I stood there a few seconds longer as we continued our conversation.

I asked Hub if he thought the kid was going to take my phone.  He did.  I felt horrible.  For taking too long.  For not listening to my husband.  For being plain “stupid.”

I’m not one to intentionally put myself or others in a dangerous situation.  I don’t think many people are.

I told Hub later I wonder what I would have done if the kid had taken my phone.  Mentally, I knew that even though I have a few half marathons under my belt, I don’t run long distances at a time and I wouldn’t be able to chase him more than a couple of blocks.  He looked at me and said simply, “I’d have tripped him.”

My sweet Hub.  Always ready with a logical response.  Love him. ❤