Hub & I popped into the bookstore last weekend and I strolled over to the magazine section.  This in itself is not part of my “norm” when going to the bookstore because … well … because. 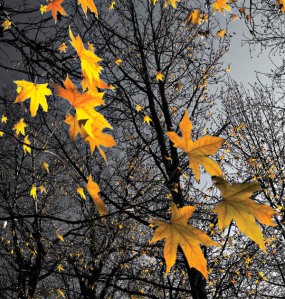 I bought a polarizing filter a couple of weeks ago and I was looking for some insight on what to do and how to use it.  Skimming through the various magazines, I picked up this month’s issue of Popular Photography.  There were several interesting articles that piqued my interest, one in particular on shooting fall foliage, and so we paid for our purchase and headed home.  I loved the photo accompanying the article.  The starkness of the trees in the background against the gray sky and the burst of color of the leaves.  Spectacular!

There’s a state park east of Luling that I had been curious about and never been to.  So Hub & I headed east and went to the park yesterday afternoon.  Because we had heard there was water within the park and neither of us knew if it meant creeks, ponds, or lakes, I was expecting to work on shots over water: making the water more translucent, reducing the sun’s reflection on my subjects.

The drive up to the park was beautiful.  Autumn in Texas rarely disappoints.  We don’t have many trees with leaves that turn colors like other parts of the country but we do have farm land.  LOTS of it, acres of it.  This is the time of year when farmers are harvesting crops and mowing their fields.  I love the round bales of hay.  I’ve seen fields upon fields of the round bales scattered about looking like giant checker pieces tipped on their sides.  I tried shooting a field of them a few weeks ago but I’m not happy with my results.  It was either the lighting (it was overcast and misty) or my composition.  I’m not sure which, or if it was both.  I didn’t capture what I wanted to convey, so the photos sit in storage on my hard drive.

This is why I was thrilled when I bought my copy of Popular Photography last week.  I want to take lessons but don’t have the time (or the money for that matter) so reading tips from the pros is how I’ll learn and improve.

As Hub & I were driving into the park, I was commenting on the beauty of the trees arching over the road.  We rounded the bend and then I noticed the sun shining through the leaves and I remembered what the author of the article had said about backlighting.  I saw some trees with leaves that had begun to turn and so I asked Hub to stop the car.  There weren’t many, but enough for me to try.  I must admit, between Hub’s honking at me to hurry because there were cars coming up behind us (he had stopped in the middle of the road) and having issues with the polarizing filter (I’m learning), I am pleased with my results.

Next up on the horizon is learning how to shoot in monochrome.  I finally felt brave enough to start messing with the different buttons on my camera and happened upon the picture settings to manually switch between standard, portrait, landscape, and monochrome.  There are others, but these are the ones I want to practice with.  I was shooting “moving targets” in monochrome on our way home from the park and thought I had some great shots until I downloaded them onto the computer and saw how blurry they actually were.  They’re all in the trash.  I guess I should have kept one or two of them just to measure my progress.

I’ll be heading out again today for more practice.  The sun’s been coming up later (as in close to 8am) and so I still have time to enjoy my coffee and play with the poochies before I get ready to greet the sun.  You see, there’s this park I drove through the other day …